Your baby’s cognitive development keeps getting better and better! Every child develops differently, but at this point in their lives, they’re beginning to weave old skills and new information together to grow more as individuals. During this phase, they’ll most likely say their first words and take their first steps. This is also the phase where their identity begins to develop. You baby is beginning to recognize you as well as themselves as individuals. If your baby were to look in a mirror, they would now recognize it as a reflection of themselves rather than another baby. As your child continues to grow and transition from infant to toddler, they’ll learn more about the world around them and of themselves. 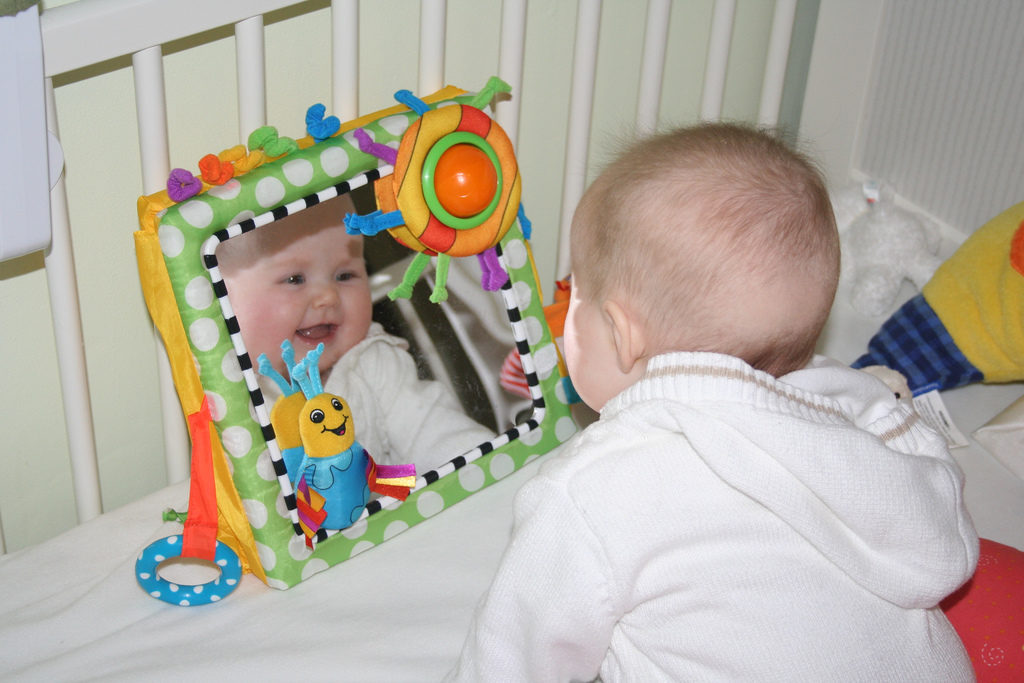 Your baby will start to recognize themselves // source: flickr

Babies usually begin to say their first words anywhere from 9 months to 18 months. At around 8 months, your child begins to have intentional interactions: they follow your eyes and direct you with their own. Your child will still mostly be communicating through gestures, but will also begin to realize that language is the best way of getting what they want. They might have already come up with their own symbolic vocabulary like making a sound for a certain toy. Perhaps their goo-goo’s have started to sound like real words. As children’s mouths become more developed, they can make more consonant sounds. These baby babblings are called protowords, the last step before that first word!

Although babies at this point might seem to understand your words, they’re mostly relying on other cues to figure out what you want. If you said “no” sharply, they might stop what they’re doing. However, the effect would still hold if you said “yes” or another word in the same tone. By a year old though, they begin to listen and look at you.

In the second half of your child’s life, they begin the transition to physical independence. This is when you child will most likely take their first steps! Babies in this stage begin crawling. This may manifest in different ways: some children alternate their hands and knees while others might pull themselves around on their arms. Babies also begin to sit up without help and transition from sitting up to lying down or crawling. Once children are a year old, most can stand and walk a couple steps without help.

Their fine motor skills also further develop. They begin exploring what they can do with their hands like the pincer grasp, where they grab something with their thumb and index finger. They also begin to point or poke things with their index finger. They also can voluntarily let go of things now. You might realize that the house seems louder as you child begins to move things around: smashing blocks together, moving objects into different containers, or banging objects into the floor. While a bit nosy, it’s important to stimulate these new motor skills by encouraging exploration and movement.

Here are some of the physical developments you may see in your infant during this time // source: pathways.org

At 8 months, infants become much more socially in tune. They can now match appropriate vocal emotions to emotional faces, meaning when they hear an angry voice, they’ll pair it to an angry face. When they hear an emotional song, they can pair it to a face with the corresponding feeling. They can also match the speed of someone talking to the corresponding person talking. At this point, when they look at you, they are both looking and listening to what you’re saying.

During this time, your child is also starting to recognize familiar and unfamiliar situations. For the first time, they might get scared of strangers when they used to be unfazed at getting passed around at 3 months old. They might start to develop fears such as for the dark. You baby might also start to feel separation anxiety, where they realize there’s only one of you and you aren’t there. This phase will pass as she comes to understand the space around her and understand her interactions with the world.

2. As your baby grows and develops, it is time to change the way you have been playing to take advantage of their new skills! Here are some fun game ideas from Babycentre to help you bond and laugh with your baby.

3. It is important to keep in mind that every infant is different and develops at their own pace. Here is a list from the American Academy of Pediatrics of developmental milestones that are often reached by 12 months of age.